Ethereum CFD allows you to leverage profits based on the Ethereum price. You don’t think that’s possible? Then read on and find out how it works.

Anyone who has looked at Ethereum has seen the astonishing rate growth of this cryptocurrency over the past few months. At the beginning of the year 2017, the value of an ETH (it is the Ethereum unit called Ether) was still 6 EUR. By the end of 2017 it was around 580 EUR. A growth rate of 9700% (!). Whether this growth can be achieved again in such a short time remains to be seen. Ethereum will probably continue to grow in the long term, but such a growth in such a short time is rather unique and will probably not happen as soon.

In our search for opportunities to achieve this growth in other ways, we looked at CFD (Contract for Difference) as well as at ICOs (Initial Coin Offerings). For some time now, Ethereum CFD have been able to be traded without a margin requirement, which allows for high leverage of profits at calculable risk. For example, from the mid of June 2017 until year end, the Ethereum share price has risen by 80%. Those who invested EUR 1,000 directly in ETH at the mid of June received a bonus of EUR 800. If you had instead opted for an Ethereum CFD, the additional CFD lever of 30 would have made it possible to earn an incredible 24,000 EUR (in both cases, for simplicity’s sake, it would have cost nothing).

A league similar to the ETH growth rate at the beginning of 2017 and competitive to many of the current ICOs. Reason enough that we will take a closer look at Ethereum CFD in the following, and look at their functionality, advantages and disadvantages.

Everything you need to know about CFD at a glance

For those in a hurry, below is a summary of all the key points on CFDs discussed in more detail in this article:

At the beginning, another important hint: Just as with the cryptocurrencies themselves, CFDs are subject to high price fluctuations (volatility). In other words, you should only invest the money that you are prepared to lose in the worst case. Furthermore, this contribution does not constitute investment advice. It is only intended to show the mechanisms that are possible to increase a potential Ethereum price gain by a multiple (also called “leverage”). Ideally, you can become rich even faster than with the already high growth in value at Ethereum, but it is also possible to lose all invested money just as quickly. Therefore, wise and well-informed action is very important for both Ethereum and Ethereum CFD.

CFD stands for Contract of Difference, i. e. an agreement between two parties on the performance of an asset. This means that a contract is concluded between two parties, a CFD provider and a CFD customer. It stipulates what happens if the market value of a certain asset either increases or decreases. The asset is often referred to as an underlying or basis asset. For example, shares or commodities such as gold or oil can be used as underlying. More and more often, cryptocurrencies such as Ethereum and Bitcoins are being offered as underlying assets.

Assuming that you want to use CFDs to profit from an increase in the price of Ethereum: You would select those CFDs that have Ethereum as their underlying (other words: tied to the Ethereum price). If Ethereum’s share price actually rises from the set point in time, then – to put it simply – the Ethereum CFD customer receives the value by which Ethereum has risen since the purchase of the CFD and additionally receives a substantial markup, the so-called lever on top.

The following graphic illustrates this. Similar to stocks or cryptocurrencies, CFDs are bought at a certain point in time. If you then decide to sell the CFDs in the future within a profit phase, the difference between the purchase price and the selling price is the profit of the underlying asset. This is similar to selling stocks or cryptocurrencies that have risen in value since they were bought.

However, if you wanted to profit from rising prices when buying the CFD and the price of the underlying asset falls, you as the CFD customer remain seated on the difference since the CFD was purchased. Similar to stocks or crypto currencies that are sold at a loss. See graphic below.

Unlike stocks or crypto currencies, the profit or loss margin can be many times higher. The reason for this is the so-called leverage. It will be explained in more detail in the further course of this article and which is actually an important instrument for trading CFDs.

The case in the previous example of profiting from a rising price trend is called “going long” for CFDs. If the price has risen since the CFD was bought, you are in the profit zone. But if it falls below the purchase value, you are in the loss zone.

Unless otherwise stated, for the sake of simplicity we will always assume “long” in the rest of this article. So we want to profit from rising prices in order to make it easier for the beginning.

Up to now, this ominous lever of CFDs has been mentioned frequently, increasing the profit of CFDs many times. But how does it actually work? To explain the mechanism of the lever, I have to extend a bit further and start with the so-called margin.

Imagine, the value for 1 ETH is currently 250 EUR at a crypto exchange. If you want to buy 1 ETH, you would have to pay 250 EUR for it. Sure thing. Now it becomes interesting: If you buy an Ethereum CFD instead, you don’t have to pay 250 EUR to get the equivalent of 1 ETH. Instead, only a fraction of this is required. That fraction, which you have to pay for an unit of an underlying asset is usually given in percent and is called margin.

Unfortunately, there is always shadow where there is light. In the case of the CFD lever in long mode, the shadow is that the lever also makes itself noticeable when there are price losses. In this case in the opposite direction, namely into the loss zone.

Check conditions of CFD provider to clarify limitation of loss

Until recently, it was quite possible to lose more than you had originally deposited. Until the beginning of 2017, there was a so-called obligation to make additional payments. This means that after you have only deposited 1,000 EUR into the CFD, another 5,000 EUR would have been charged. That’s because the total loss would have been 6,000 EUR. The CFD provider was allowed to claim the 5,000 EUR from you as an additional payment.

However, this practice was banned by the BaFin at least in Germany at the beginning of 2017. Additionally, many CFD providers from abroad also do not charge you more than your initial deposit. Take a look into their conditions before you start. That is, you are just standing straight up to the maximum amount of money you started with. In our example, this is only up to a maximum of 1,000 EUR. This limitation is likely to make CFDs significantly more attractive in the future, as the risk is much more predictable. With CFD providers from abroad, however, it is important to ensure that they explicitly waive the obligation to make additional contributions.

With a CFD lever, you have the opportunity to trade huge value for the underlying asset with only a fraction of the capital, so that you can participate in the profits as much as you can lose them.

If you have gotten a taste for Ethereum CFD and would like to try them, I can recommend the provider Plus500. Our blog receives a commission if you trade here, so you can support us this way if you want.

So if you have some money left over, you should consider investing in Ethereum CFD as well as Ethereum. It is much more transparent to leverage your Ethereum profit with CFDs than with ICOs, for example.

At this stage, again the important hint: Just as with the cryptocurrencies themselves, CFDs are subject to high price fluctuations (volatility). In other words, you should only invest the money that you are prepared to lose in the worst case. Furthermore, this contribution does not constitute investment advice. It is only intended to show the mechanisms that are possible to increase a possible Ethereum price profit many times over (also called “leverage”). Ideally, you can thus become rich even faster than with the already high growth in value at Ethereum. However, it is also possible to lose all invested money just as quickly. Therefore, wise and well-informed action is very important for both Ethereum and CFDs.

May large profits be with you 😉 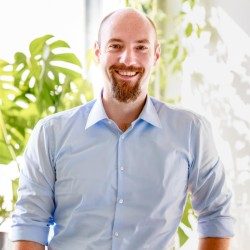 Stephan Niedermeier
Stephan is member and co-founder of Coinauten, a network of experts on cryptocurrency and blockchain technology. He has already founded several successful technology companies and is a Blockchain investor from the very beginning. Stephan advises investors and companies on strategic and technological issues.
Twitter - LinkedIn - http://niedermeier.io